Dhaakad Movie Review: Kangana Ranaut, Arjun Rampal, and Divya Dutta starrer ‘Dhakad’ has been released today. Kangana Ranaut is seen doing her action in this film. This special agent named’ Dragon Fly ‘ is enough alone to break the sweat of the good. In front of Kangana Ranaut, there are not one but two Dhakad villains Arjun Rampal and Divya Dutta and both of them have created a lot of difficulties for Kangana in this film. Action movies have a different audience in India and the biggest kick in’ Dhakad ‘ is that you see Kangana Ranaut doing this action. Kangana has worked hard for this film, from losing weight to doing tremendous action. Now know if this film can succeed Kangana’s hard work or not.

Story: Agni (Kangana Ranaut) is a special agent who breaks up a women trafficking syndicate in Europe to rescue several girls. Meanwhile, he is brought to India to catch the real mastermind of all this wrong business. Although she has some memories of India that she does not want to come here, then she comes to India and finds rudravir (Arjun Rampal) and Rohini (Divya Dutta) who run the business of stealing coal and women trafficking. That’s the story of this movie.

Talking about the story and the screenplay, the initial 10 to 15 minutes are quite boring. In the first scene, Kangana, who has become an agent Agni, seems to be taking action, but why she is doing this, you will not understand anything. Connecting to the story is quite difficult. The screenplay of the film is very slow and cumbersome. This is an action movie and the problem is that you will only watch baseless action. My complaint will also be with the editing team because this film is only 2 hours 13 minutes, but when you go to the cinemas, you will also find it difficult to cut this 2 hours. Many scenes have been drawn to create Arjun Rampal’s panic image. Also, the film has a lullaby and some scenes, which repeatedly appear on the screen. They seem boring once or twice. Keep in mind, listening to this lullaby you can also sleep in theaters. Kangana has been taught by The Hollywood action director direction.

Why Kangana with flat face…
Dhakad has introduced Kangana Ranaut as an action heroine, but like any other Bollywood action movie, Kangana is also not acting here. In many places, Kangana looks like a ‘Krish’ robot with a blank face again. When Kangana shoots, many goons fall together, but the same when Kangana’s bullets end and the goons fire bullets, Kangana leans and escapes from the bullets. The lighting of the film, The Set is also so dark and low mood that you will feel a bit cumbersome again and again. Yes, be an agent of Kangana Sharib Hashmi whenever you come on screen, you feel a little relaxed and normal. But apart from this, everyone is busy with just slush-slush with a flat face. The first half of the film is much more boring.

After the interval, Kangana Ranaut’s slightly emotional side is also seen. She looks a little emotional, even cries, seems to do everything to save a baby girl. But to reach this second half, you have to watch the entire first half. There is no suspense in this film at all. You already know what’s going to happen in the story. Not only that, something gets to know much earlier. 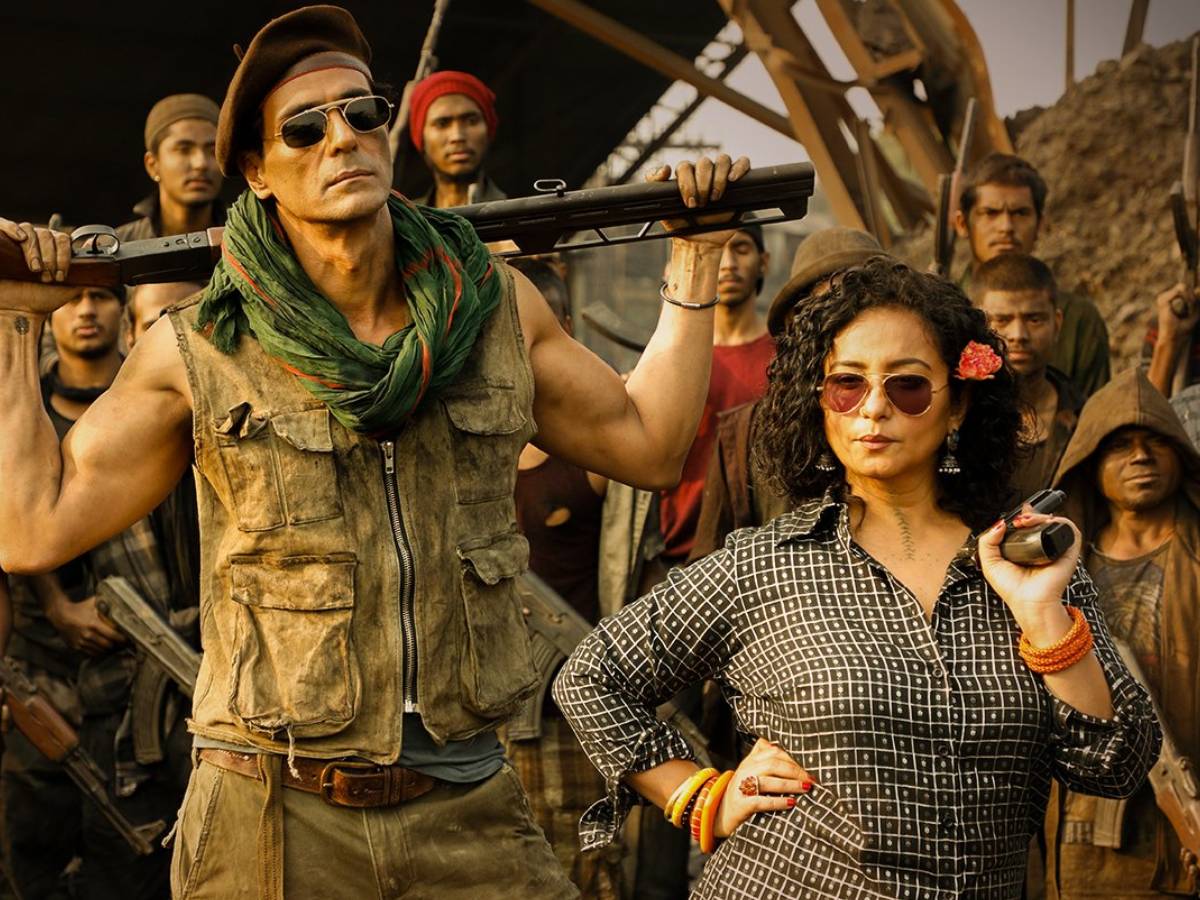 Divya Dutta has done amazing acting in this film.

Divya Dutta will win hearts in Kangana Ranaut’s film
It is said that the bigger the hero, the more terrible and dangerous the villain is in front of him. Whether you pick up Shoal’s Gabbar or Mr. India’s Mogambo, this strategy has been adopted in Dhakad. Agent Agni Buni Kangana is faced with two terrible villains like Arjun Rampal and Divya Dutta who create awe in the heart. In between these two, you look like Psycho villains who enjoy doing blood.

While some of Arjun Rampal’s scenes are so creepy to tell, you can’t live without being impressed by Divya Dutta’s acting. Divya has been amazing in some scenes. In fact, Kangana Ranaut, who became agent Agni, is doing a lot of fighting, but Divya and Arjun have done the work of acting on the screen. Seeing a scene of Arjun Rampal, you will remember the Khilji of’ Padmavat’, who gives a speech to fight his hungry soldiers and gives a visit to the motherland and the mughlia Sultanate. One such scene Arjun is also doing in this film, and is convincing young boys to steal coal.
In the end, you must have understood that this movie can prove to be a tough task by going to theaters. If you want the reason to watch the film, then they are the acting of Divya Dutta and Arjun Rampal and the action of Kangana. Don’t worry too much about the story. This film by my side 2 stars.

Dhaakad Review: whether you like or dislike Kangana Ranaut, but one thing had to be believed that the actress is amazing and this thing has been proved again.

Dhaakad Review: whether you like or dislike Kangana Ranaut, but one thing had to be believed that the actress is amazing and this thing has been proved again. ‘Dhakad’ is Kangana’s Dhakad movie, but should you watch this movie? What is the good and bad things of the movie. Let me tell you in this review.

The story…
The story of the film was clear from the trailer itself that Kangana is in the character named Agent Agni and she will complete a mission and the mission will be to end the Black Empire of Arjun Rampal and Divya Dutta.The story is about how Agent Agni performs this mission and what revelations occur during this time.

Acting…
The biggest feature of this film is the acting of stars.Kangana Ranaut’s acting is awesome.When Kangana beats goons, it is great fun. Often we see heroes doing such action, but the fun of seeing a heroine doing this kind of action is different. Kangana makes many look changes in the film and looks amazing in every look.Kangana has worked hard on the action scenes and it looks like Kangana really looks daft.

Arjun Rampal’s acting is tremendous.A villain that you start to hate. Arjun also changes many looks every time and looks creepy. Divya Dutta is very frozen in the negative role. In one scene, when she tortures a little girl, you start to get upset with her and this is the success of her character.

Action…
The film has tremendous action.Hollywood-style action has been tried and largely succeeded

Reduction…
The film’s biggest enemy is its screenplay. Which is quite loose. Among the amazing performances, you often do not understand what is going on in the film.The film seems to linger from its track. The story and the screenplay could have been better and the film would have been better.

Direction…
Rajneesh Reji Ghai has made a good direction. He has tried his best to make a movie like Hollywood.From Kangana’s style to the action sequences are shot wonderfully..But the director had to work a little harder on the screenplay.

See why..
If you are a fan of Kangana, then definitely watch.Kangana will win your heart.It’s nice to see when she beats everyone. Even if Kangana is a hater, you can see because Kangana is also beaten in it

Kangana Ranaut and Arjun Rampal starrer film Dhakad finally reached the cinemas. The film was released today. Directed by Rajneesh Raji Ghai, it is a spicy spy-based action entertainer film. In which the actor Kangana Ranaut plays the character of a spy agent Agni. I love New York, I’m, Rangoon, Simran, Manikarnika, segment what is ranging from mess and alive, until the actress said outright fail movies are given. Due to which the Tanu Weds Manu 2 star had long been looking for a hit movie. So will Kangana Ranaut’s recent release this film be able to complete this quest? Let’s know.

What is the story?

Super spy Agni (Kangana Ranaut) is tasked with infiltrating an international sex trade organization and destroying it and bringing it to India. But a deep move, Double Cross and pair of enemies outsmart him in his own moves. How he wins. That’s the story of the movie.

The life of the film is Kangana Ranaut. People will begin to applaud the actress by seeing her striking style, sharp posturing, and blistering action scenes. Apart from this, the supporting cast of the film Divya Dutta and Saswat Chatterjee have also done excellent work. Those who support the character of Kangana Ranaut.

Where is the shortage?

Kangana Ranaut’s strong acting and the feeling of seeing her doing Dhakad action is the USP of the film. But they feel pushed when some action scenes are choreographed in a very childish way. There are some action scenes that seem less than a joke. Such is the style of giving the graph to his character. Where weak scripting seems to dominate the film. Arjun Rampal has also tried to handle his character. Which is written very weakly. Even the big reveal in the climax is so childish that the impression of which the audience gets quite early. In this case, this climax does not leave any special effect. It looks as if writer-director Rajneesh Razi Ghai and his co-writers, Chintan Gandhi and Rinish Ravindra, are trying to get out of the script in a hurry and all of a sudden everything ends.

Kangana Ranaut has breathed life into her character. Watching them do Dhakad action scenes also feels very special in itself. However, the rest of the film’s weaknesses were heavy and the performer alone could not save this film. From Bollywood Life, the film has a full two and a half stars out of 5.