Squad in Hindi means team or group. Well, the web series ‘squad’ shows the story of a group of brave men who do anything to protect the dignity of their daughters in the country. But in fact, this web series has a cast of film houses. From producer-director to hero-heroine, many prominent people are from a family of some film celebrity. In the lead role, the debutant is Rinzing danzogpa, who is the son of the famous villain Danny danzogpa. Malvika Raj, the heroine of the web series, has played the role of Kareena Kapoor’s childhood in the film Kabhi Khushi Kabhi Gam. She also belongs to the filmy family. His father Bobby Raj himself is a film maker. Nilesh Zahida Sahay is the producer, director and writer of the web series, Who is the son of the famous actor Zahida himself. 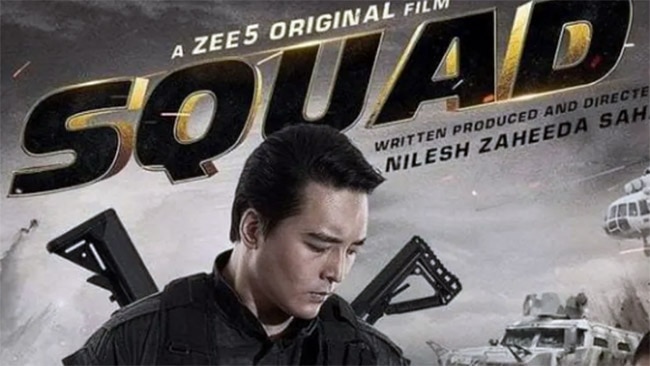 Rinzing danzogpa, the son of the famous villain Danny danzogpa, has made his debut in the action-thriller web series.

The web series ‘squad’ is streaming on the OTT platform G5 from November 12. Under the banner of G Studios, the creators of the web series are Nilesh Zahida Sahay, Brajesh Sahay and Mohan Gopinath. Nilesh Zahida Sahay has also done writing along with directing the web series. Rinsing danzogpa, Malvika Raj, Pooja Batra and Mohan Kapoor are among the important characters. Rinsing dzogpa and Malvika Raj as lead actors are being launched through this web series. Action-drama films are considered the safest and most successful for such launches anyway. But many film makers and directors forget that even before the action hero is depicted in the style they are portraying, such scenes have been shown in the films produced in this genre. But even knowing this, many times all of them remain unaware.

The story of the Squad Web Series

The film begins with an anti-terrorist operation in PoK, Pakistan Occupied Kashmir, where the commando is introduced to Bhim Rana (rinsing denjongpa), who is trained with the NERO (national emergency response operation). The mission of the team on the anti-terrorist operation is successful, but BHIM fails to save a little girl. The terrorists kidnap and take the baby girl and a bomb is tied to her body. BHIM is forced to leave the girl and return with his team. Meanwhile, SOS alerts that the granddaughter of one of India’s renowned scientists is missing. The investigation agencies of several countries are searching for him, but he is in Georgia in the clutches of terrorists. The national emergency response operation is notified immediately.

National Emergency Response Operation Team chief Nandini Rajput (Pooja Batra) forms a team to search for the missing girl after getting full information about the case, who is given the responsibility of bringing back India’s daughter from Adjara, Georgia. Aria (Malvika Raj) and Eddie (Tanisha Dhillon) and BHIM Rana are present in the team. The mission of this team is to save the ‘daughter of Hindustan’. Of the daughter of the Hindustan whom BHIM himself says, ” We are Hindustan. Will not speak directly will break.”That’s how the whole story of the web series goes around saving the innocent girl. After saving the girl, Bham Rana is also convinced that the bomb-bound girl was not able to be saved in the clutches of the terrorists in Kashmir. So he wants to save it and also lighten the burden from his mind.

The web series ‘squad’ could have been designed to be an interesting groundbreaking action thriller like a rescue mission, but the story and direction are weak. The one-liner dialogue is not well written in view of the actors and their characters. Looking at the web series, it seems that writer-director Nilesh Zahida Sahay wanted to put together a lot of things in the story, but could not reconcile them. So the audience is duped. However, this is the debut of rinsing Denzongpa, the son of veteran actor Danny Denzongpa, so there was speculation that there would be a leaked action movie. Because the result of the children of film stars who debuted the action movies earlier has been positive. From the movie ‘ Phool Aur Kante ‘to’ heroopanti’, the debutants like Ajay Devgn and Tiger Shroff were shocked to see the unique stunts in these films. But both the body and the language of rinsing denjongpa are not the same thing.

Apart from rinsing denjongpa, the rest of the artists Malvika Raj, Pooja Batra and Mohan Kapoor have also done mediocre work. Not only that, the music of the web series also sounds like a stub in it. Yes, one thing that’s nice is the location chosen to shoot. Especially in it some interesting places like Georgia and Latvia are shown on the screen very beautifully. Overall, the web series ‘squad’ could have been good, but Nilesh Zahida Sahay has not done justice to anyone in taking on multiple responsibilities at once. She is a producer, director, writer and action director in the web series. This can explain where the root of the problem lies. Would have been better that Nilesh any a responsibility to brilliantly play better then the web series could contain. It is not necessary to look at it.