Pushpa : The Rise-photo: social media
The film ‘Pushpa part one’ by actor Allu Arjun, who became the biggest hit of the past year, has now been released in Hindi on OTT as well. Originally made in Telugu, the film has dubbed versions in Malayalam, Tamil, Kannada and Hindi languages. All other versions except Hindi have already been released. But now the wait for the Hindi Patti viewers is also over.

Pushpa the rise – photo: social media
Pushpa released in Hindi too
Millions of Hindi Patti viewers have so far watched the Telugu version of the film with English sub titles. But abanpushpa Hindi was released on Amazon Prime Video at 12 pm on Friday night. The audience of Hindi patvi is not tired of praising this film. Allu Arjun is a mega star and popular all over the country. 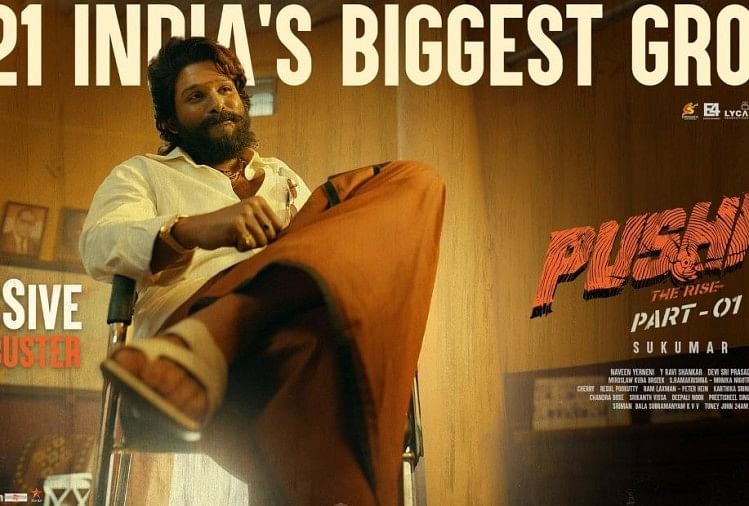 Pushpa Part 1-Photo: Amar Ujala, Mumbai
This appeal was made by the makers
Earlier, it was reported that the Hindi version of the film crossed the Rs 80 crore mark and the popularity of Allu Arjun, the makers of Pushpa: the rise had said that Amazon Prime Video had pushed its release date forward, but now the film has been released.

Pushpa da rise – photo: insta / pushpa_film_
Film making records at the box office
The film ‘Pushpa part one’ is also seen by people for its songs and fighting. The film was released in cinemas on December 17, 2021.The film is setting new records every day at the box office nationwide. ‘Pushpa: The Rise’ features Allu Arjun with Rashmika Mandana and Fahd Fasil in the lead roles.

Pushpa the rise – photo: social media
What is the story of the film
The story of Pushpa Part One, A man who one day becomes a number one smuggler while working as a Porter, is based on the smuggling abroad of unsurpassed red sandalwood found in the border forests of Andhra Pradesh and Tamil Nadu.